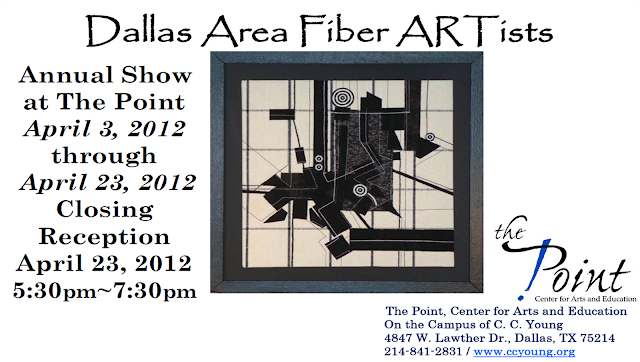 Twelve Voices from One Graduate Reception

Twelve Voices from One


Students of Jane Dunnewold’s Art Cloth Mastery Program will exhibit at San Antonio’s Radius Gallery from March 29 through May 31, 2012. Open to the public, a reception will be on Thursday, March 29, from 5:30pm – 7:30pm.

Based in San Antonio, Jane Dunnewold is a world renowned, award winning mixed media artist. An author of books and DVD’s related to the subject of art cloth, Dunnewold exhibits and conducts workshops domestically and internationally.

The twelve exhibiting students from around the world studied the elements of design, dyeing textiles, surface manipulation and mixed media applications as they honed their individual styles. Five week long studio sessions are supplemented with rigorous interim assignments during the two-and-a-half-year endeavor. The exhibition is the culmination of the participants’ efforts.

Designed and implemented by instructor/artist Jane Dunnewold, the Art Cloth Mastery Program is unique in its ability to provide advanced education in contemporary surface design practices. The program is enrolled each year from a roster of applicants who must provide evidence of previous experience and serious intent, and is limited to twelve students per term.

Each participating artist will present a short lecture on the development of her work. Presentations will showcase a range of inspiration and technique. Sessions will be scheduled on Tuesday, March 27, and Wednesday, March 28, at a time to be announced. Free and open to the public.
Posted by SDA.Texas at 3:25 PM No comments: 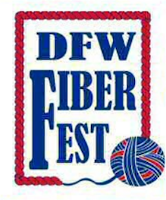 March 30 - April 1, 2012
About DFW Fiber Fest
DFW Fiber Fest is a premier annual fiber event in the Dallas-Fort Worth community. 2012 will be the seventh year in which it takes place. Held in early April each year, DFW Fiber Fest is a locally focused non-profit organization that offers both vendors and classes. There is a juried selection of local/regional fiber vendors (with a few who are from outside of our regional area to spice up the mix). Educationally, a slate of classes from both nationally known and local teachers in the fiber arts is offered- primarily in specialty areas of knitting, crochet, and spinning
This year's event will again be held at the:
Grapevine Convention Center
1209 South Main Street
Grapevine, TX 76051
for more info please visit http://www.dfwfiberfest.org/
Posted by SDA.Texas at 8:00 AM No comments: 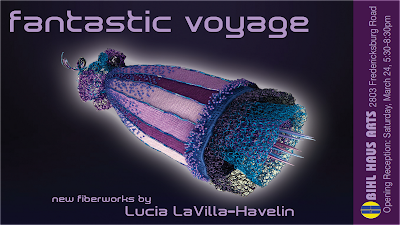 Be sure to visit www.lucialavillahavelin.com for more information, the new work will appear on the site when the show opens.
Posted by SDA.Texas at 1:25 PM No comments:

Nick Cave Project
Internationally renowned visual and performance artist Nick Cave, whose work has been called "must be seen to be believed" by The New York Times, has served as the artist-in-residence for UNT's Institute for the Advancement of the Arts in the 2011-12 academic year.

Cave, who studied at UNT in the 1980s, also has been commissioned by the UNT Art Galleries and the institute to create a new performance piece that will take place on campus in the spring with collaborative partners from the College of Music, the Department of Dance and Theatre and other UNT arts programs. The piece will incorporate 30 newly created Soundsuits in the shapes of horse-like forms that move through campus and evolve into hybrid beings. Cave is renowned for his elaborate Soundsuits sculptures -- wearable art made of such items as twigs, beads, sequins, Easter grass and dryer lint. When worn, his Soundsuits envelop the body, making sounds as the materials brush together.
Students and volunteers from the community have been working tirelessly since the projects inception to assist in the construction of the raffia soundsuits.


The UNT Art Galleries and the Institute for the Advancement of the Arts have partnered to host visual artist Nick Cave as the 2011-2012 Artist in Residence, commissioning Cave to create a new work of public art at the University of North Texas. Internationally recognized for his Soundsuits--sculptural objects that when worn become instruments for movement and sound--and for working with communities to choreograph public performances, Cave has proposed a new performance piece for UNT, to take place on campus in March 2012. The piece, titled “Heard”, involves 30 horses running through campus, being corralled by 50-100 percussionists, and breaking apart into 60 hybrid beings that move in increased improvisation. Soundsuits, choreography, and musical score have been created and will be performed in collaboration with students, faculty and the surrounding community.
About Nick Cave


Chicago artist Nick Cave works between sculpture, design, and performance. He has had numerous one person exhibitions, notably a traveling exhibition, Nick Cave: Meet Me at the Center of the Earth, organized by the Yerba Buena Center for the Arts in San Francisco in 2009, opening at the Taubman Museum of Art in Roanoke, Virginia in September. Venues include the Scottsdale Museum of Contemporary Art, Arizona; Fowler Museum at the University of California Los Angeles; and the Seattle Art Museum, Washington. Awards include the prestigious Joan Mitchell Foundation Award (2008), the Artadia Award, the United States Artist Award and the Joyce Foundation Joyce Award (2006), and the Louis Comfort Tiffany Foundation Award (2001), among others. Cave’s works are in many public art collections, including the Brooklyn Museum of Art, NY; Birmingham Museum of Art, AL; Museum of Contemporary Art Chicago, IL; and the Studio Museum in Harlem, NY. Cave is represented by Jack Shainman Gallery in New York.
Cave earned a bachelor of fine arts degree from the Kansas City Art Institute in 1981 and a master of fine arts degree from Cranbrook Academy of Art in Bloomfield Hills, Mich., in 1988, after beginning graduate studies in 1984 at UNT, where he worked with professors Vincent Falsetta in painting and Shigeko Spear in fibers. Cave also trained as a dancer at the renowned Alvin Ailey Dance Theater.
end_of_the_skype_highlighting
Nick Cave: Heard
Date:

Visual and performance artist Nick Cave's Soundsuits have drawn acclaim from around the world and have been called "Must Be Seen to Be Believed" by The New York Times.
This semester, The renowned artist is capping his appointment as 2011-12 artist-in-residence of the University of North Texas Institute for the Advancement of the Arts with a free exhibition of his Soundsuits and a highly collaborative performance piece featuring 30 newly created horse-like Soundsuits - made and performed with the help of UNT students. Cave's Soundsuits - wearable lauded internationally in performances and exhibitions.
Selected Soundsuits from Cave will be on display Feb. 24 (Friday) through March 24 (Saturday) at UNT on the Square, a downtown Denton art space. Exhibition hours are 9 a.m. to noon and 1 p.m. to 5 p.m. Monday through Friday, with extended hours until 8 p.m. Thursday, and 11 a.m. to 3 p.m. Saturday. For information, visit www.untonthesquare.unt.edu or call
940-369-8257 begin_of_the_skype_highlighting